The culinary recipes of this area of southern Catalonia have been transmitted from generation to generation. Many times, an oral tradition that has been recorded in cookbooks or recipes of elderly people in different towns in the counties that are part of the Costa Daurada (Golden Coast). If you want to experience the rituals that involve the preparation of these recipes in situ, we recommend that you do not miss the Gastronomic Days that are celebrated in cities of the Costa Daurada (Golden Coast) and that you consult the most typical recipes that we have selected for you. 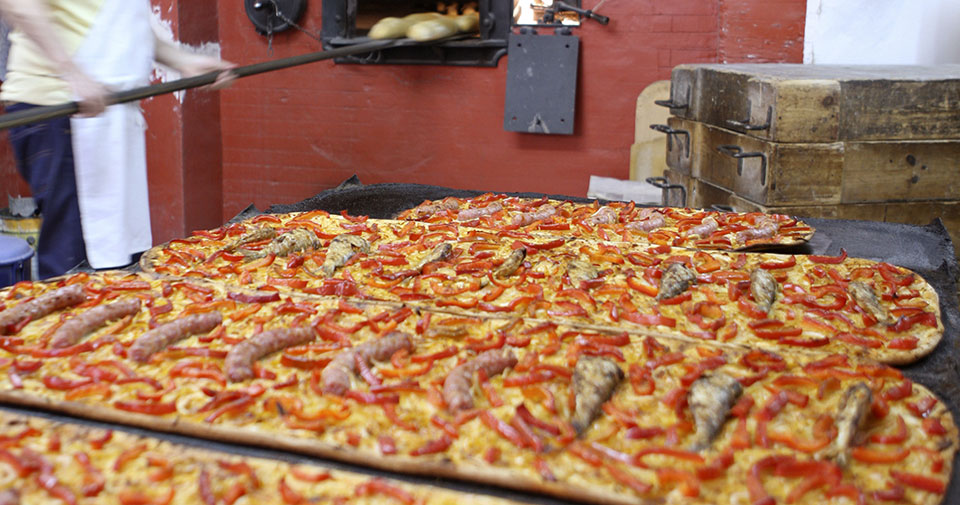 Do you remember that we explained to you that we have six micro-worlds to discover? If anything, the Conca de Barberà is characterized by its succulent dishes ... Cocas de recapte – pies with `escalivada´ prepared with grilled eggplant and bell peppers, olive oil and sometimes onion, tomato, minced garlic and salt – artisan sausages and the best stews are some of the essential in this region. We recommend that you do not miss the opportunity to do some shopping in the bakeries or butchers of the villages you visit. Reserve a small part of your budget to buy some carquinyolis (almond biscuits) in l'Espluga de Francolí, some merlets - variety of almond-filled sweets from Montblanc or a good l'Albió cheese. One of the characteristic dishes of the area is the wild boar civet. Civet is a type of gastronomic preparation for game meat that is previously marinated with red wine. In the different restaurants of the region you can taste this succulent and energetic dish, prepared according to the traditional recipe, or also with the thousands of original varieties offered by the author restaurants. Obviously, you can accompany it with a good red wine from the Conca de Barberà Denomination of Origin. Let yourself be advised by the experts of the area and the pairing will be incredible! Here we leave you the recipe of the Civet de Senglar, a little piece of the Conca de Barberà to savour. 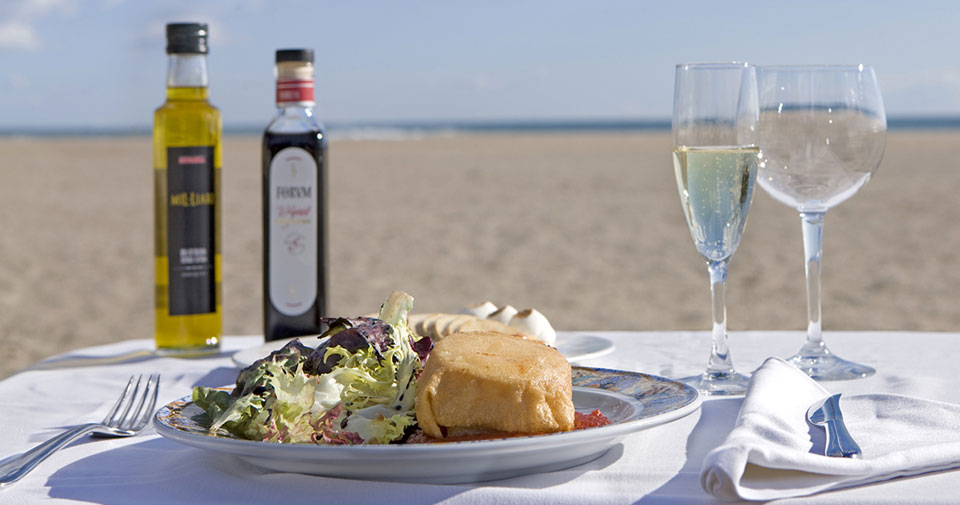 This region is also a very rich gastronomic one. It is not difficult to imagine seated at the table of a good restaurant of the Baix Camp, tasting a freshly caught fish in Cambrils, a good octopus - protagonist in the Gastronomic Days of Mont-roig - accompanied by a real Prades potatoes, or a fish suquet prepared with the unmistakable aroma of the hazelnuts of Reus. On a sunny day, and in front of the sea, the experience of tasting the delicious tuna of Hospitalet de l'Infant will leave you a mark, as it will enjoying a vermouth on Mercadal Square in Reus. And if you have a really fine palate, always ask to dress your salads with the good Siurana olive oil. Don´t forget it! For dessert, a classic of the area is the menjar blanc, a sweet cream flavored with cinnamon and lemon peel, typical of the medieval cuisine or, failing that, a good cherry pie. If you are a good foodie, you will enjoy the visits to agro-stores and cooperatives of this region. If you want to know how to prepare the menjar blanc, the jewel of this region´s sweet crown, here is the recipe! 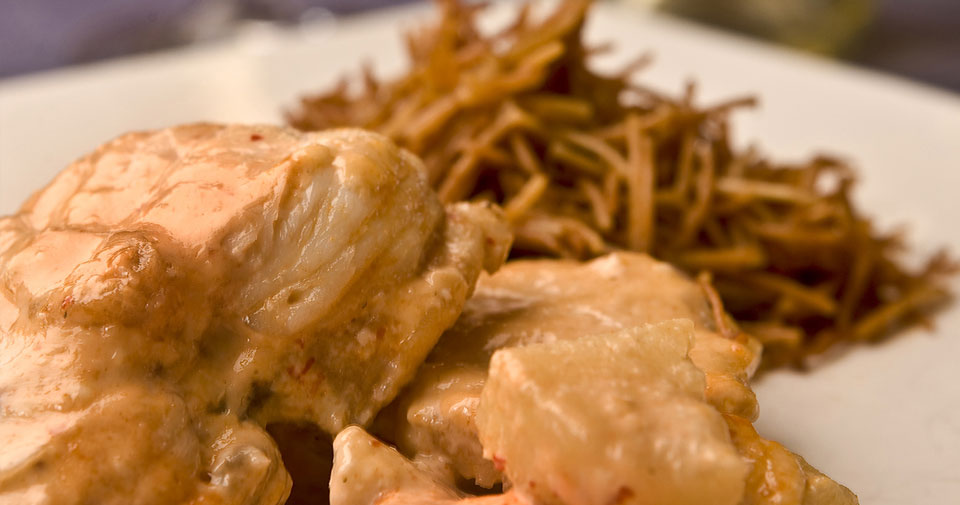 As always, the gastronomy of Tarragonès is a true reflection of its character. And, in this case, an important share of the wealth has come from the sea. The blue fish, recognized by the Blue Fish of Tarragona Denomination of Origin is the raw material for many of its recipes, along with the shrimp. You can find several restaurants offering a cuisine based on fresh seafood, where rice and noodle dishes stand out, as is the tradition of the ancient fishermen. Some surprising dishes like El Bull, a traditional dish made with the dried tuna stomach and potatoes, is an increasingly popular recipe in Torredembarra, as is the ranxet, a simple stew made by fishermen when working on the sea. The rice or noodles rossejat is one of the dishes that most identify this region. Its main peculiarity is that it uses the rossejat technique, which consists of browning the rice or raw noodles along with the stir-fry in oil until the noodles are translucent. It is afterwards when the fish stock is added to boil. Its color and its aroma are unmistakable and will leave a good memory in your taste buds! Do not forget to accompany this dish with a good white wine, the highest expression of a land bathed by the sea and pampered by the sun almost all year long. Do you want to know how to prepare a good noodle rossejat? Here we explain how step by step! 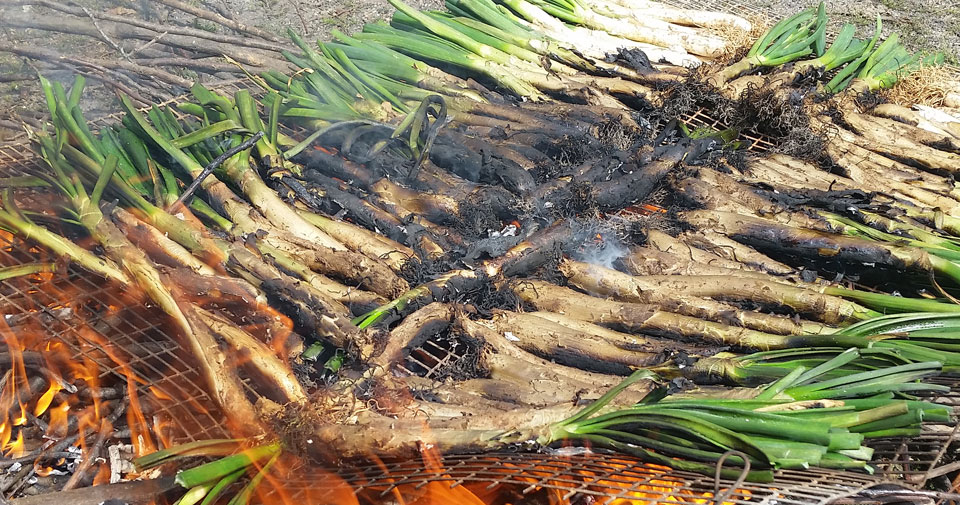 Which is the gastronomic physiognomy of the Alt Camp region? Historians tell us that the origin of the calçotadas as a social event had its origin in the year 1946, when students of the Labour School of Valls, and more specifically of the Artistic Drawing and Painting classes, met to make calçotadas (grilling elongated onions). The menu always used to be the same, and it consisted of calçots dressed with a special sauce, lamb meat and grilled sausage of Valls with alioli (a sauce made of garlic, olive oil and egg), along with good bread and red wine of the region. This tradition has turned into a Catalan national dish and, of course, one of the most characteristic of the region. The Alt Camp is also notable for offering spectacular grilled snails, as well as some good sausages, such as deer sausages and fuets (dry cured sausage in a pork gut). The juicy pa de pessic is a sweet ideal for snack or breakfast. Another typical delicacy of the region are the recapte pies, made with peppers, onions, hazelnuts and butifarra sausage. Give yourself a whim and do not think about the scale! Here's how to prepare a delicious sauce for the calçotada.

Cuisine of poor people, rich tastes in the Priorat region 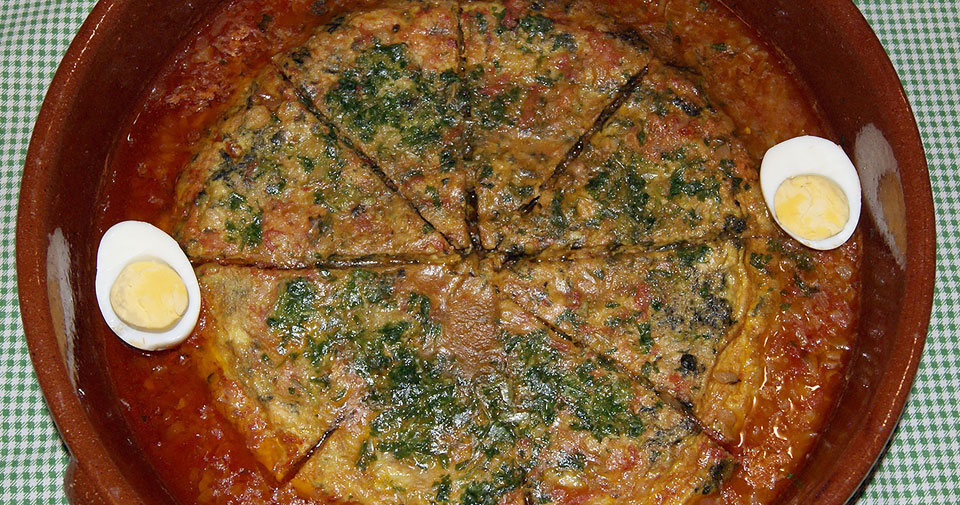 The Priorat is a good region to make an eno-gastronomic route. The Montsant and Priorat Denominations of Origin will guide your steps between wineries, landscapes and unique and welcoming restaurants. But before you drink, you have to fill your stomach. That's why we recommend you not to miss the indescribably delicious truita amb suc -omelette with sauce-, accompanied by beans and spinach, one of the most typical dishes of the region. According to the master Pep Salsetes, this recipe is one of the maximum expressions of the imagination of the poor people´s cuisine. For dessert, orelletes, a fried sweet that is also typical of Penedès, or the oil, flour and suga pies, a soft pie, with a diameter of 20 centimeters that can be found in most bakeries in the region. It is imperative that you know how to prepare a truita amb suc. . Here's the recipe! 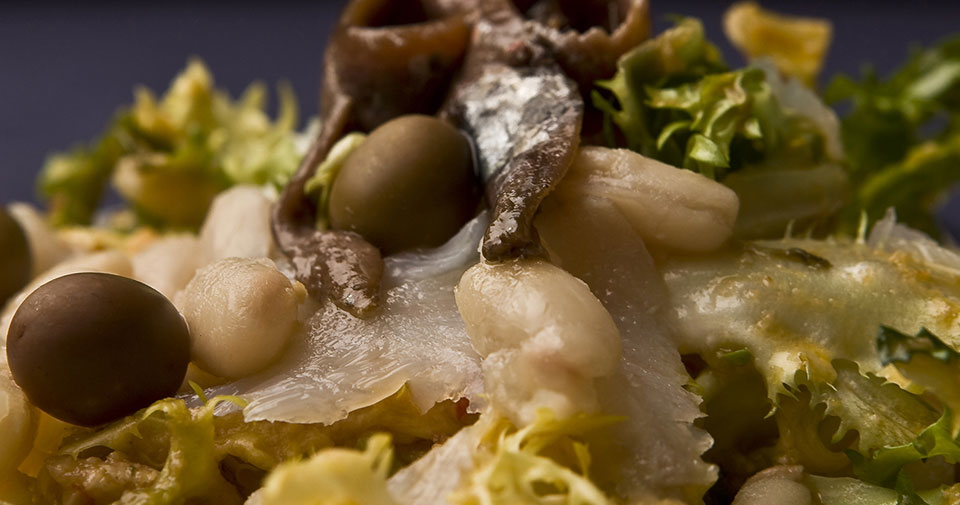 The Baix Penedès is a region between the sea and the mountain where, in winter, it is usual to eat a good xató, escarole salad garnished with shredded cod, fresh tuna, anchovies and olives, and well dressed with the succulent sauce based on ñoras (dried green pepper) and nuts that gives the dish its name. Very often, it is accompanied by an assortment of seasonal vegetables prepared in an omelette. Another of the region´s delicacies is the coca enramada, with spinach and beans, or with the pork loin or grilled herring. These dishes, full of character and boldness, require the accompaniment of a good wine or cava from the Penedès Denomination of Origin. Further inland, the grilled meat with mushrooms in autumn and winter are a must. And if you visit the coastal villages, do not forget to experiment with the seafood cuisine. A good rice will never disappoint you. Among the typical desserts, we also find bufats and the orenetes for Lent. The Vendrell region produces an exquisite spirit flavored with anise or cinnamon, of Italian origin, which is named resolis and perfectly accompanies the most typical carob-based desserts of the region. A universe of flavors! 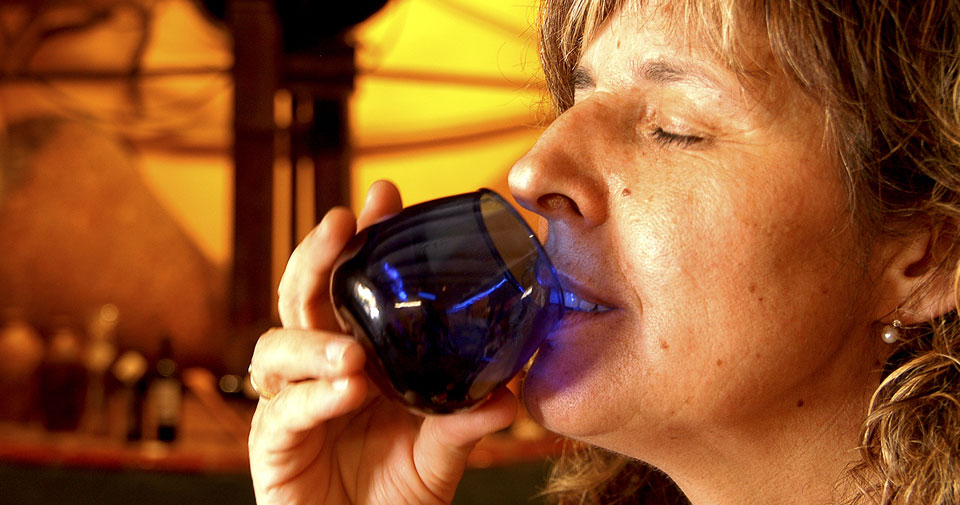 Protected Designations of Origin refer to a product that comes from a specific geographical area that marks its quality or characteristics, and whose production, transformation and processing is carried out entirely in that area. The Regulatory Council guarantees that the products of a Protected Designation of Origin comply with the requirements established in the European regulation regulating them. In Catalonia there are several products that meet these conditions, and on the Costa Daurada (Golden Coast) we have the Siurana oil and the hazelnut of Reus.

Taste and feel the wine

END_OF_DOCUMENT_TOKEN_TO_BE_REPLACED 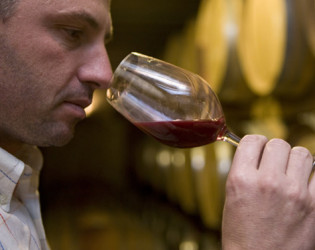 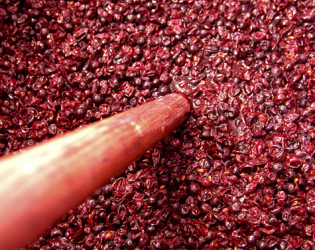